In my current story, Nick, Nick gives Meg a book for Christmas inscribed:

Dear Meg, Listen to the children.  They have the answers to all the questions. Love, Nick.

Once I had the inscription, I needed a book to go with it.  What book would fit such a thought?  It did not take me long to realize the book I needed was Winnie the Pooh by A.A. Milne.  Much has been written about the philosophical lessons of this beloved children’s book, but  I’ve found my own inspirations, and I thought I would share a few with you. 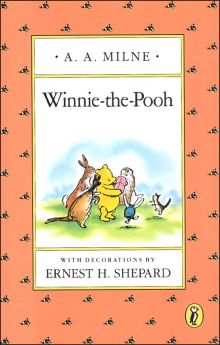 —In the Introduction, Milne says that you can take Piglet to school because he is small enough to fit in your pocket, but Pooh is too big to go.  Because of this, he says, Piglet has more education than Pooh, but Pooh is ok with it because “Some have brains, and some haven’t, he says, and there it is.”  That statement stands on its own in so many ways that I will let you take your own meaning from it.

—The very first lines of chapter 1:

Here is Edward Bear, coming downstairs now, bump, bump, bump, on the back of his head, behind Christopher Robin.  It is, as far as he knows, the only way of coming downstairs, but sometimes he feels that there really is another way, if he could stop bumping for a moment and think about it.

Oh my goodness, this is so me.  How often do I get so caught up in accomplishing all my tasks, frantic and frazzled, and I sense that there must a more efficient way to do it all?  Trying to write and social network and be supermom and superwife and superdaughter–so many balls in the air and me always on the verge of dropping them all.  If only I could stop juggling long enough to think about it, surely I would find a better way.

—Everywhere Pooh goes he makes up a little song about what he is doing.  When he climbs the tree to get to the beehive and the honey, he sings: Isn’t it funny/How a bear likes honey?/ Buzz! Buzz! Buzz!/I wonder why he does. As he climbs a little farther, he is getting tired so he sings a complaining song:

It’s a very funny thought that if Bears were Bees/They’d build their nests at the bottom of trees/And that being so (if Bees were Bears)/We shouldn’t have to climb up all these stairs.

I wish I could remember to make up a song about all the little things I have to do in life.  Wouldn’t it all be easier with a song? I will have to remember this during school when I get so tired walking from class to class to class (that’s what I do as a parapro; I go to different classes throughout the day).  How about this:

The halls seem longer every day/As I trod from place to place;/But children see a place to play/To count tile squares or have a race.

Not Pooh’s melody, I agree, but better than whining and complaining.  Also, the kids shouldn’t be racing in the halls, I know, but please don’t ruin my rhyme with your logic.

My favorite, and the most telling for me, is when Pooh gets stuck in Rabbit’s door.  “It all comes,'”said Pooh crossly “of not having front doors big enough.” To which Rabbit replies, “It all comes,”  said Rabbit sternly, “of eating too much.”  I believe that one speaks for itself.

There is so much on every page that I cannot even begin to share it all.  If you have not read Winnie the Pooh since you were a child, I recommend picking it up for a pleasant hour on a leisurely afternoon.  There really is a better way to do things if you stop bumping long enough to think about it.

3 thoughts on “The Wisdom of Pooh”