His journey starts with a call from Obi-Wan, which he accepts, not for purpose but for payment.  As Luke answers his own call, Han meets his every step with doubt and judgment, and yet he follows everywhere Luke goes.  He wants so desperately to believe.  Protesting the whole way, he accompanies Luke on the road of trials, through the belly of the whale, guided by proxy by Obi-Wan, meeting up with his very own personal goddess, Leia.  And though Luke and Leia become his companions, let’s not forget his one true friend, Chewbacca, who follows him through every trial, no matter what the cost.  Also, while Luke has his light sabre, Han has the Millennium  Falcon as his special token of power.  All the pieces are there and they all fit together to make the perfect picture.

Ultimately, after all of his trials, he decides to take his reward and flee the scene.  But he just can’t do it.  He is so close to obtaining his goal, so close to being part of a group with a greater purpose, a greater faith, that he has to come back, rushing in to save the day so that Luke can do what he must to save the rebellion.  Han has achieved his goal.  He has found something to believe in and people who can give his life meaning. 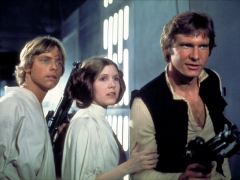 Put in this format, Han’s hero’s journey is just as classic as Luke’s.  Joseph Campbell would be proud.