I am a firm believer in making the most of each moment of your life. Being a person who spends a lot of time in imaginary worlds, this is a trait I work on consciously with varying degrees of success.

I said I believe it. I didn’t say I was good at it.

Anyway, I also believe it is important to know where you came from. Your history tells you a lot of valuable things about who you are. My immediate history, of course, is my most personal one. I was born in Nashville, Tennessee. My parents are Jane Van Arsdell and Robert Bainbridge. I have blue eyes because both of my parents have blue eyes. I love home and family like my Aunt Margaret loved home and family. I got pregnant quickly and easily, and my aunt has eight children, my grandmother had five (three lived to adulthood), her mother had nine. There is a strain of lunacy that comes down through the generations, and, well, just ask my husband. Genetically linked? Who can say, but the evidence is persuasive.

My maiden name is Bainbridge, an ancient Anglo-Saxon name with most of its roots in Northern England (Lancastershire, Northumberland, Yorkshire). Because of a genealogy search I discovered that some of my direct ancestors immigrated to the United States in 1732 from Yorkshire. When my husband took me to England in 2004, I was eager to see if there were still any signs of the Bainbridge family in Yorkshire. I found one.

We were strolling through Haworth in Yorkshire, making our way to the Bronte parsonage. There, big as life, was a shop called Venables and Bainbridge. I was so excited! Was it possible that I shared a common ancestor with the shop proprietors? I looked in the window to see what they sold.

It was books. Venables and Bainbridge is a bookstore. Who knew that loving books (and writing them) would be a genetically linked trait? 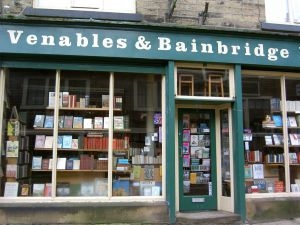 What does your ancestry reveal about you?

After a life-long marriage to her college sweetheart and raising two wonderful sons, Beth Warstadt is a firm believer in the happy ending, but the journey is not easy and the trials along the way are not for the faint-hearted. Her stories are engaging tales of heroes and heroines who find themselves in challenging situations they did not make with difficult people they did not choose. Never fear! This is romance. Love triumphs over evil, and the good guys always win.
Previous Post
Next Post