Before our trip down the Rhine, I had never internalized the real impact of World War II on Europe.I knew the standard history taught to every American child, plus a few stories from my father about that time in his life in Nashville, Tennessee, on the other side of the globe from the actual battlefields. More recently I have observed as today’s students are taught the same history with a few more details and different perspectives.

We hear a lot about the French surrender at the beginning of the war. That is a fact of history but it is not the whole truth. The French fought hard and suffered mightily at the hands of the Germans. Young men faced the brutal murders of their entire families if they did not cooperate with the invading forces. The countryside was not spared the wrath of the Axis powers; on the contrary, it was the devastated site of many battles as the Allies fought stave off the advancing German forces, aided by passionate French resistance fighters. After Pearl Harbor, the Americans were in the thick of it.

Without question the most moving site we visited was Turckheim and the battlefields of the Colmar Pocket near Strasbourg, France. You’ve never heard of it because the much more famous Battle of the Bulge was going on at the same time. Far better than I can say it, this is the description from the museum website:

Turckheim is set at the heart of the “Pocket of Colmar”, the last bastion of Germany in French territory. From Mulhouse to the south of Strasbourg, from the Crête des Vosges to the Rhine, behind a front which stretched 100 miles, the battles that raged from November 1944 to February 1945 devastated the entire Alsace Plane and its foothills. After already waiting four years to be liberated, the population of Alsace were forced to show a further test of patience and sacrifice during these three months of warfare, aggravated by polar temperatures.
Today, an 18th century cellar used as a shelter by some Turckheim residents for 10 weeks, living without any water or electricity and sleeping on the floor, is now a unique museum in
Alsace, dedicated to the liberation of the Colmar Pocket and all those involved.

Our guide on this tour was a young Czechoslovakian historian, whose commentary was so vivid that I could see the bombed out buildings and hear the echo of the artillery fire across the now beautiful, peaceful valley. An American flag flies permanently on the top of the hill overlooking that valley from which American forces pushed the Germans across the Rhine and back into Germany, liberating the battered population below.

It was American fathers and sons, husbands and brothers, who blew into this area of France and took it back from its cruel occupiers.

Of all the stories we heard that day, the most moving was that of Audie Murphy. I had heard about him from my father, but like so many of Daddy’s stories, I filed it away under “interesting trivia.” As it turns out, his acts of heroism were not trivial at all. 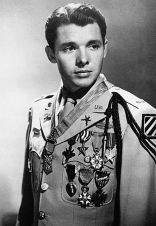 Murphy was just a kid from Texas. The son of sharecroppers, by the time he hit his teens his father had deserted them and his mother had died. Nonetheless, the attack on Pearl Harbor was his call to action, and his older sister helped him enlist in the army in 1942 by lying about his age. He was 16.

On  January 26, 1945 he and his men were tasked with holding off the Germans while his battalion waited for reinforcements. Though the history books say that he sent his men to safety in the woods, that is not the whole story. He had thirty-eight men to hold off two hundred soldiers, and nineteen of those men were mowed down before they even had a chance to fight. Audie Murphy jumped up on a nearby disabled tank and turned its guns on the open field where the enemy forces were advancing. He single-handedly held them off, one against two hundred, until his reinforcements showed up.

Our guide was an eloquent and passionate authority on the Colmar Pocket and the actions of Audie Murphy, telling the story as we stood a looked across a field where dozens of young men laid spilling out their life’s blood far from homes that they would never see again. But…

Before we got off our tour bus, he stood up at the front turned to face us, tears in his eyes. “I am Czechoslovakian,” he said, “and my grandfather has told me stories of the war. He has told me that if it was not for the Americans we would all be dead. Thank you. We have not forgotten.”

Even now it brings tears to my eyes. At a time when America is taking a beating all over the world, here was someone who loves us. I have never been prouder to be an American.

The Colmar Pocket. History worth visiting.