I love allusions.  They create a strong connection between reader and writer, not to mention reader and reader.  We’ve read the same books! We’ve seen the same movie! We know the same myths and legends!  Allusions are cultural unifiers.

Overstating you say?  Look at JK Rowling’s Harry Potter.  How many of us know that McGonagall’s first name, Minerva, is the Roman version of Athena, goddess of wisdom?  What about Sirius Black’s first name for the Dog Star when his animagus is a big, shaggy dog?  Neville’s last name, Longbottom, alludes directly to Tolkien, of course, linking Neville to the simple folk of the Shire.

In my own Nick, I allude frequently to other Christmas works.  In particular I use “A Visit from St. Nicholas.”  Meg’s face gets blasted with “dried leaves before a wild hurricane.”  She sees “the moon on the crest of the new fallen snow” and the full moon gives “the luster of mid-day to objects below.”  Her Nick is a man of few words, as in “he spoke not a word but went straight to his work.’ There are many others in there to be discovered like the Easter Eggs in a video game or movie. 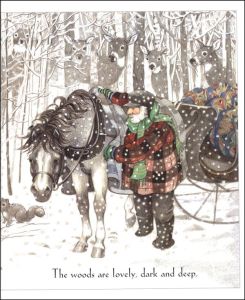