Uncle Buck is hard to find.  The best way to see it is to find it by chance on one of the channels that shows older movies–not antiques, just older than the last 10 years–like TBS or TNT. Sometimes you get lucky, and it plays on Showtime or The Movie Channel with no commercials. Fortunately it shows up fairly often, and when you see that it is on, it is well worth two hours of your time. 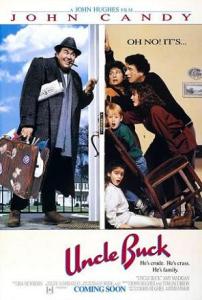 I am a huge John Hughes fan.  While he is best known for the Home Alone series, he has made several others that I admire and will no doubt turn up here as “Little Movies I Love,” such as She’s Having a Baby, Dutch and, of course, Uncle Buck.

The story: straight-laced Bob Russell and his wife, Cindy, have to leave town suddenly because her father has had a heart attack.  With no one else to call, they ask Bob’s n’er-do-well brother, Buck (played by John Candy) to come and watch their children, Maisy (Gaby Hoffman), Miles (Macauley Culkin), and Tia (Jean Louisa Kelly).  While Maisy and Miles are precious and precocious little children, Tia is a very angry and rebellious teenager, with no respect for her shiftless uncle.  Buck really steps up to the plate, inept but determined to do his best with the children.  In the background is Buck’s impatient girlfriend of eight years, Chanice (Amy Madigan), who has finally had enough of waiting for him to get his act together, and has serious doubts about the sincerity of his commitment to his new responsibility.

John Candy is wonderful and warm as Uncle Buck, or UB as the kids come to call him.  He is precious in his struggle with the washing machine and dryer, and hilarious as he tries to dry the clothes in the microwave.  His giant pancake for Miles’ birthday make the boy’s eyes light up like he’s seeing Santa Claus, and you’ll want to cheer out loud when he decks the party clown that shows up drunk.  He stands up for Maisy (to the tune of ‘Wild Thing’) to her school principal when she tries to make the six-year-old into a “serious student,” saying that no six-year-old should take anything seriously.

Best of all is his handling of Tia and her “boyfriend,” Bug.  Bug is a scumbag, and Buck goes after him with a ‘takes one to know one’ ferocity that warms the heart of all those who are afraid she is about to make a terrible mistake (you know, ‘going all the way’). By the end of the movie, they have become fast friends, resulting in the learning of serious life lessons for both.

So Uncle Buck is good, fun entertainment for all ages.  See it for a stellar performance by the great John Candy, and for the pre-Home Alone McCauley Culkin as Miles. Amy Madigan’s supporting role is fun to watch, as is Laura Metcalf’s overly forward neighbor.  The jokes are hilarious, but not offensive.  See it if you get the chance.